Madagascar has been described as the world biological marvel so unique to compare to the rest of the world when talk about fauna and flora; the reason why scientists called it the Eight continent.

It is among the world’s top biodiversity hotspots, very rich due to its high level of endemism but it als boasts remarkable diversity of its natural habitat found nowhere else on earth.

Madagascar is the fourth largest Island in the world. It holds 5% of the world’s biodiversity regardless its size only 0.4% to compare to the planet Earth.

Madagascar is a land of striking geography from Soaring Mountain to vast canyon land, from damp rainforest to spiny forest and swampland.

The highlands are of volcanic origin. The landscape is dominated by mountains and rice fields because of the region. The landscape is somewhat monotonous and covered with grass, eucalyptus and pine. Laterite and washy soils are the most common.

The South: Southern Madagascar is known as the spine area, because of its unique landscape with nature. Here grow various succulent plants. These plants do not need almost no water and yet can still handle the heat. Here, rainfall is very insufficient, because it rains only two months per year at most, unlike in the East, more than five months during the rainy season. The region is rich in mineral resources with native plants and beautiful wild beaches. The region is known as the semi-desert of Madagascar.

The North: This part of Madagascar is a hot region. It is warm almost all year. The region is characterized by the mountain of Tsaratanana whose summit Maromokotro, rises to over 2800m above sea level.

The West: The landscape is marked by the steppes. The area is rather dry, but it has a very large number of endemic plants such as various kinds of baobabs. The forests are dry. 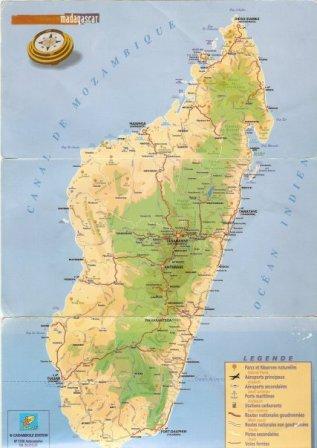 People and Culture:
To understand the history of Madagascar, you need to read a lot, observe, compare and apply to the elderly. Only less than 1pourcent of these stories were written. The rest is transmitted from generation to generation by oral tradition. The original inhabitants would have lived the island the first was the Vazimba. According to history, the Malagasy come from several countries, such as Asians, Arabs, Africans and even Europeans. Besides many Malagasy dialects, they understand each other with the official Malagasy language. French and English are the languages ​​of communication.

Manners and customs vary from region to region and from tribe to tribe. In the highlands, the dead are buried in the family vaults while in the South among the Antandroy and Mahafaly people, each vault is only for the couple. In the west, the bath of the king’s relics or Fitampoha is revered, while in the highlands, the dead are exhumed after a few years of the burial.

The Malagasy philosophy is similar: “live under the same roof, and buried in one grave. This life is for a shorter time and everyone must prepare for the afterlife. And death is just middle way between God and the living. “

Madagascar is known as the mini-continent because of the nature and variety of landscapes it can offer. The variety ranges from dry tropical forest to the landscape of the south, hilly uplands to white sandy beaches. To live in this world of unique nature, national parks and nature reserves are to be seen in these places. Madagascar circuits are different from African safaris. Here too, we are looking for animals. Given that animals are wild, they cannot be found that during a hike. This is the case of the lemurs.

It is no longer surprise anyone that Madagascar fauna and flora are unique. 85 percent of plants, over 91 percent of reptiles, 99 percent of amphibians and mammals and all species of lemurs are found only in the island. According to botanists, the number of plant species is estimated over    10 000 in Madagascar. It varies by region. In the South grows most fascinating plants. In the west, precisely in Morondava we can find baobabs. In the East till the North, the rain forest is very dense. For orchid lovers, the months of August to October are thriving for the flowering of these flowers.

Madagascar has two seasons: a hot rainy season (summer) from November to April and a cool dry season (winter) from May to October. During the rainy season, the coast, in particular, is hit by cyclones that cause serious damage.

The choice of accommodation depends on the customer’s like and the price. In Madagascar, hotels are ranked by stars and ravinala. The 3 and 5 stars have no similarity with those of Europe (in terms of comfort, equipment, etc. …).
The ravinala: This is the category of country. Ravinala is an endemic tree species, which is known as the traveler’s tree. Typically, a room in a 3 stars hotel is equipped with private bathroom, hot water, comfortable bathroom, satellite TV, some with Internet and telephone. The category Ravinala is a very simple hotel. In some places finally, we recommend the campsite.

In Madagascar, we must pay attention to names. There is a difference between the hotel and “hotely”. The hotel offers a place to spend the night or stay whereas Hotely is associated with a place to eat in Malagasy. It is therefore a local restaurant where guests can enjoy typical Malagasy cuisine. It is different from a conventional restaurant by the way they cook the food and their service.

Early in the morning, the menus are already prepared. They are expecting guests. In general, rice is offered as a main dish. Native or bus travelers usually eat it. The service is very fast. For the drink, rice water is free during or after the meal.

Rice water: the rice is cooked in a pot made ​​of aluminum, usually by coal. When the rice is cooked, it sticks, burned a little on the walls. It is then that pours water into the pot. After a few minutes, the water takes another color.

Menu item: Image with translation of the menu.

There is no highway in Madagascar. The main roads are asphalt. However, one must expect bad roads during the rainy season. The journey from one place to another can take all day. For 300 miles, it takes 3 hours in Europe, while the average in Madagascar with photo stops and lunch break lasts 10 hours. Some roads are winding, which makes the trip not very pleasant.

Madagascar has old railways. They were built in the early 20th century and linking, for example, the capital Antananarivo to Toamasina on the east coast. Fianarantsoa in the south east coast, Manakara, is not to be missed. This is a beautiful train ride through the jungle. Each station, we stop for loading and unloading. During each stop, the passenger has the chance to know with the natives and to taste their snack….

You must be careful to have enough water, biscuits and warm clothing with you. The journey of 170 miles can take 12 hours and should be expected even in the worst cases (e.g. due to derailment) to spend the night in the jungle….

Airline:
The name of Malagasy airline is “Air Madagascar”. Its emblem is “ravinala” or the traveler’s tree and handles all domestic flights.

For international flights, there are Air Madagascar, Ethiopian Airline , Turkis Airline, Air France, Air Mauritius, Kenya Airways and more. There is a direct flight from Europe, from Paris to Antananarivo and vice versa.

Madagascar isn’t exactly a luxurious destination. However, your understanding and flexibility will facilitate the stay. We will make an effort to make your trip smooth and comfortable for your well- being.

Entry into territory of Madagascar:

The visa can be applied in the Malagasy embassies in Europe and issued upon arrival at the airport of Antananarivo against visitor’s tax.

As in countries all over the world, it is wise to be cautious with its own valuables.

The local currency is the “Ariary” (MGA). Previously, the Malagasy franc (FMG). Nevertheless, there are still people who are not accustomed to the use of Ariary yet and uses Malagasy franc in commerce. Therefore, it would be advisable to ask before paying if the price is in MGA or MGF. Madagascar was under French colonial rule, so the prices follow it, especially in hotels where we calculate the price in Euro. In some stores, it is possible to pay in Euro. This also applies with VISA. But with Master Card, there are often difficulties. The operation could take several hours or even days.

The voltage is 220 V. In general; cities and villages are supplied with electricity. Otherwise, candles or oil lamps are used by the natives. For television and radio, they use batteries. For this reason, many hotels are supplied with electricity using a generator. The charge of batteries and cell phones must be managed optimally (you must be economical with electricity as to charging. The use of solar panels is in operation, but households cannot afford). In all hotels, there is electricity produced by a generator or a solar panel, so that its use is limited in time. Therefore, it is worth taking a flashlight that can be particularly useful at night.

Time Difference:Time difference between France and Madagascar is two hours in winter and an hour in summer.

With regard to malaria prophylaxis, you should contact your doctor. Insect repellent is recommended anyway. Almost all hotels use mosquito net except the highlands.